They almost rhyme.  And I believe that they should be synonymous.  So why is it that they often seem to contradict one another?

I was talking with a friend the other day about worship and  told him how sometimes it is a lot better for me if I just listen and don’t look at the people singing on stage.  He asked me why, and I told him it was because I couldn’t take them seriously a lot of the time because of their “church face”.  For those of you who don’t know what I mean, it consists of a combined expression of giddiness, serenity, and gravity, and it looks a little bit like this: 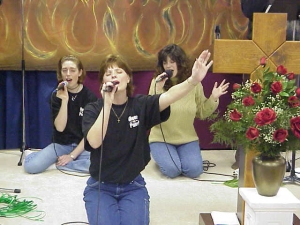 Now before anyone gets up in arms against me here,  I fully realize that I have no way of knowing the genuineness of anyone’s worship.  Yes, that is between them and God.  And I also have zero problem with charismatic displays of worship.  That is not my point–if you feel it, you feel it, and who cares what anyone else thinks.

My point is that I often get the feeling that people are simply putting on a show.  They feel like they have to look and act a certain way in order to appear genuine in what they are doing.  My question is, why can’t they just be who they are, and let the Holy Spirit work?  For some people that may be running up and down the aisles shouting in tongues, and for others it may be sitting quietly in the corner and letting God speak to them.

I personally have felt like doing both of these things at different times, as well as everything in between.  And in the interest of full disclosure, I haven’t followed my own advice.  I grew up in a very conservative Lutheran church, and up to this point, I haven’t even been comfortable lifting up my hands (even when I felt like it) because I am worried I am going to look stupid.  So why is it that we always let ourselves get in the way of really worshiping (and representing) God?

My friend pointed out that many people don’t know who they are, and so they put on whatever front they feel is expected of them at any given point.  I think that’s a good point, but I also think that quite often, authenticity can be intimidating.  And it can also be offensive to some.

I was recently reading reviews of Donald Miller’s new book A Million Miles in a Thousand Years, a book I have not yet read.  As I usually do, I clicked on the lowest ratings to try to get a balanced view of things when I came across an interesting review.  You can find the review with comments here.  If any of you have not read Donald Miller before, he writes in autobiographical form, and talks about how his life’s journey has shaped his faith.  He is often sarcastic and self-deprecating, which I suppose could be misinterpreted at times.  But the point is that he is real.  He writes about what he really thinks and feels, regardless of how it may come across at times.  And that obviously offended this reviewer.

I guess what I’m really looking for is a way to make people comfortable with themselves as God has made them.  I think if we can find a way to make the church a safe place for authenticity it will lead to a greater connection with God, both on a personal and a corporate level.  I think it will also help change the outside perception of legalism and hypocrisy, much of which, I believe, is based on a façade put up by the church and its members.

I could probably write a book about this, so I’ll stop rambling and leave you with this question:  How do we drop the image and be genuine?  I’m still praying about that one. If you have any ideas, I’d love to hear them.

Here’s a great music video by the band Hockey that illustrates how authenticity and dropping your social guard can be contagious.  Cheesy, but fun.  And I’m not sure, but I think that kid might have learned how to dance by watching videos of me from high school.